By ORBE in Awards, In the Media 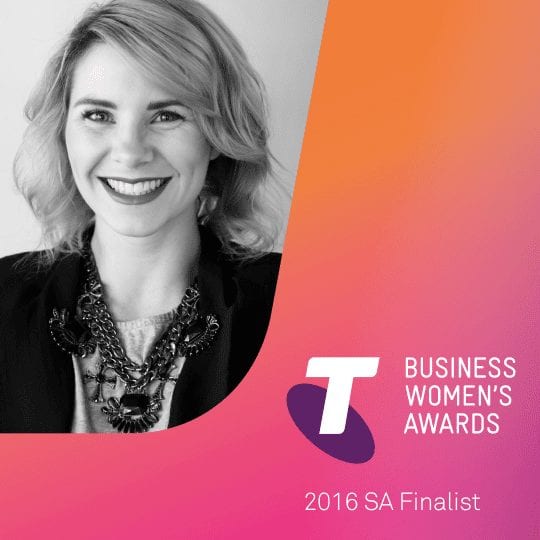 We just couldn’t be prouder of our Sam.  She puts her heart and soul into everything she does for her clients, the salons, and her creative work. It is wonderful to see her recognised for this. Winners announced in two week, watch this space!

The Telstra Business Women’s Awards have become an integral part of the Australian business calendar, celebrating the achievements of some truly remarkable women. Past winners include many of Australia’s most talented business leaders whose career paths and individual achievements continue to inspire business people around the country.

SAM JAMES-COCKAYNE DIRECTOR OF ORBE, North Adelaide has been announced as one of 3 finalists for the Young Business Women’s Award – the winner to be announced at a Gala Dinner at the Adelaide Oval on September 30, 2016.

Samantha James-Cockayne moved to Adelaide from the UK, aged 17, with her family. When she arrived in Australia, she undertook a hairdressing apprenticeship at hair salon ORBE, and completed it a year early due to breaking past records of budgets and client retention percentages and surpassing other stylists in the team. Upon obtaining her qualifications, she stayed on at ORBE and became part of the in-salon training team and was quickly promoted to salon manager.

After being an integral part of a very successful long-standing business for ten years, she decided to further her career and become a salon owner. In September 2014, she set up her own salon as part of the ORBE brand.

Samantha has three roles within the business: a manager, an employer, and an educator, ensuring the salon is well-run whilst recruiting, retaining and training her staff. Samantha’s aim is not only to style her clients’ hair, but to instil confidence in them, empowering them to feel and look their very best, and to build with them trusting relationships.

“After working as an employee of the original business, I have achieved continuous satisfaction at being part of the whole ‘big picture’ that comes with being a business owner. The Telstra Businesswomen of the Year Awards are held in such high esteem, it’s an absolute thrill and it’s so incredibly rewarding to be selected as a finalist. I am extremely proud of all the creative awards I have won, as it means I am amongst the cutting edge in the field of hairdressing – but it’s a complete honour and a dream come true to now be recognised for professional excellence as one of SA’s Top businesswomen” –Samantha James-Cockayne